Exploring the infinite universe around us

The Phoenix of Florida 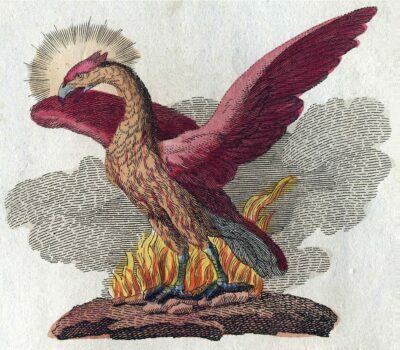 The mythical phoenix is a bird that finds immortality through resurrection from the very ashes of its own destruction into a renewed existence. Over the last several thousand years of human culture the phoenix has been portrayed in many different bird forms and varieties of plumage, but the common theme is always renewal. A renewal that is only possible after it prepares for and realizes its own destruction. 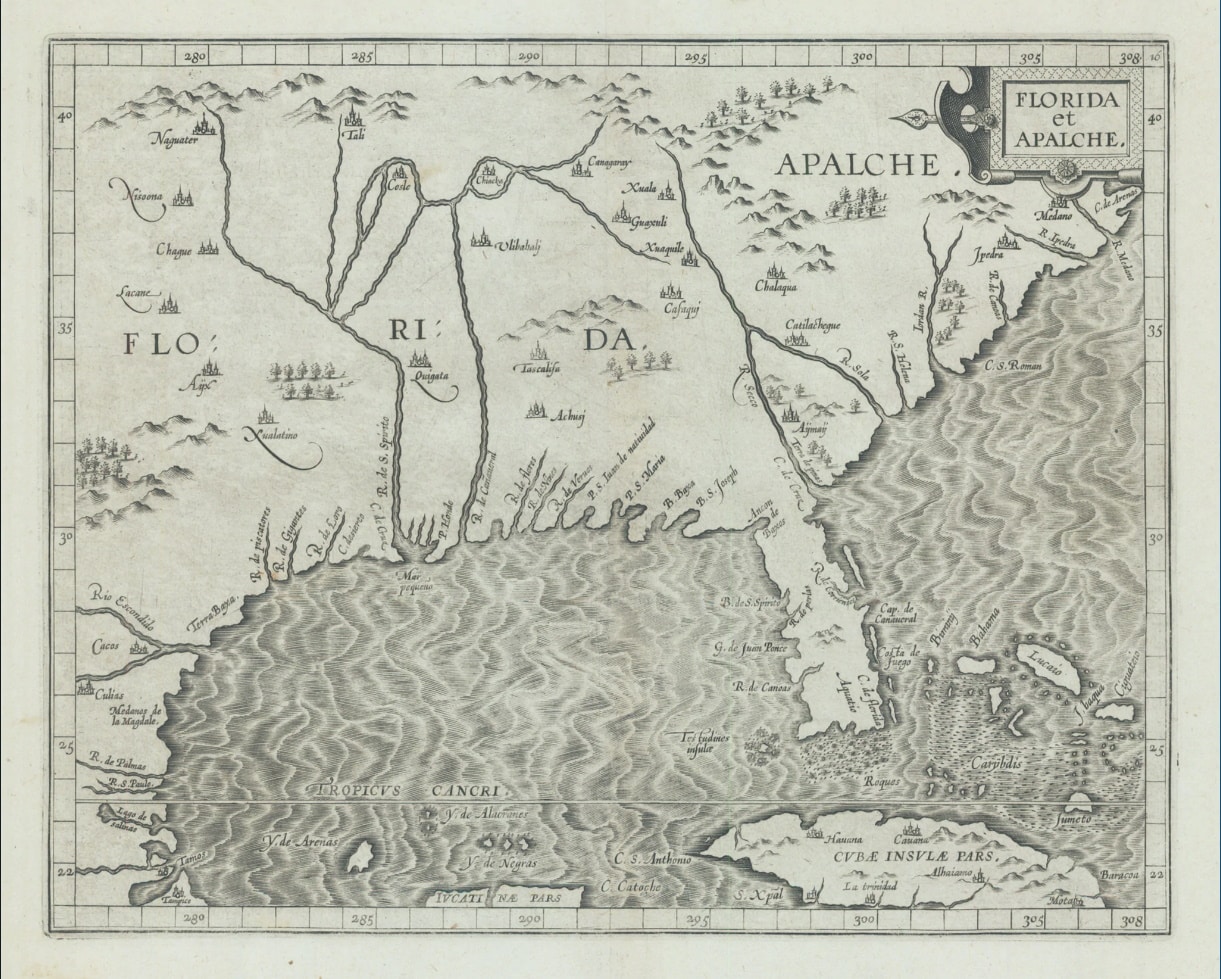 Floridians know and prepare for destruction. Since 1900, there have been 187 Atlantic tropical cyclones that have struck Florida making it the most pummeled state in the US. As we look into history, the first recorded tropical cyclone to affect Florida occurred in 1523 off the west coast where “Two ships and their crews were lost.” 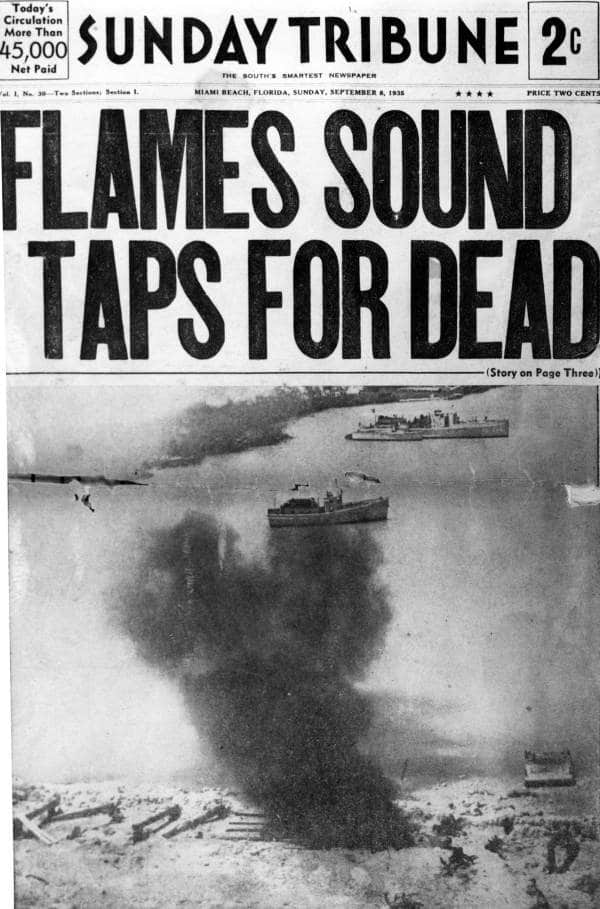 The most powerful tropical cyclone to hit Florida happened in 1935. The “Labor Day” hurricane hit the state with wind speeds of 185 mph and storm surge of 18 – 20 feet, leaving 409 people dead, mostly veterans who were building the roadways connecting the Florida Keys.
The deadliest tropical cyclone to hit Florida occurred in 1928 where storm surge caused Lake Okeechobee to overflow the southern edge of the lake and flooded hundreds of square miles under nearly 20 feet of water, killing over 2500 people.  

Of the top 10 strongest tropical cyclones to hit Florida, 4 of them have occurred in the last 18 years. Many of us reading this have been here for all 4 of those and more.
Hurricane Ian is among those 4. Not only one of the strongest, but Ian was also the deadliest storm to savage the state since 1935. The current number of fatalities attributed to the storm is listed at 126 within the state of Florida. Ft Myers and Cape Coral were especially devasted. The death toll in Lee County, where both cities are located, is listed at 57.
If you were to take a drive just days after the storm through the most devasted parts of the state, it is clear that nature’s wrath was felt. In a surreal scene under clear blue skies, boats and cars are intermingled in areas where neither belong. Familiar avenues lined with businesses where tourists once walked look more like landfills. Countless century old oaks lay on their sides, sometimes on buildings.  The remnants of roofing materials lie strewn across fields and on fences. Livestock and those who tend to them are among those that were hardest hit. The numbers of cattle, horses and other livestock that were lost may never be known.   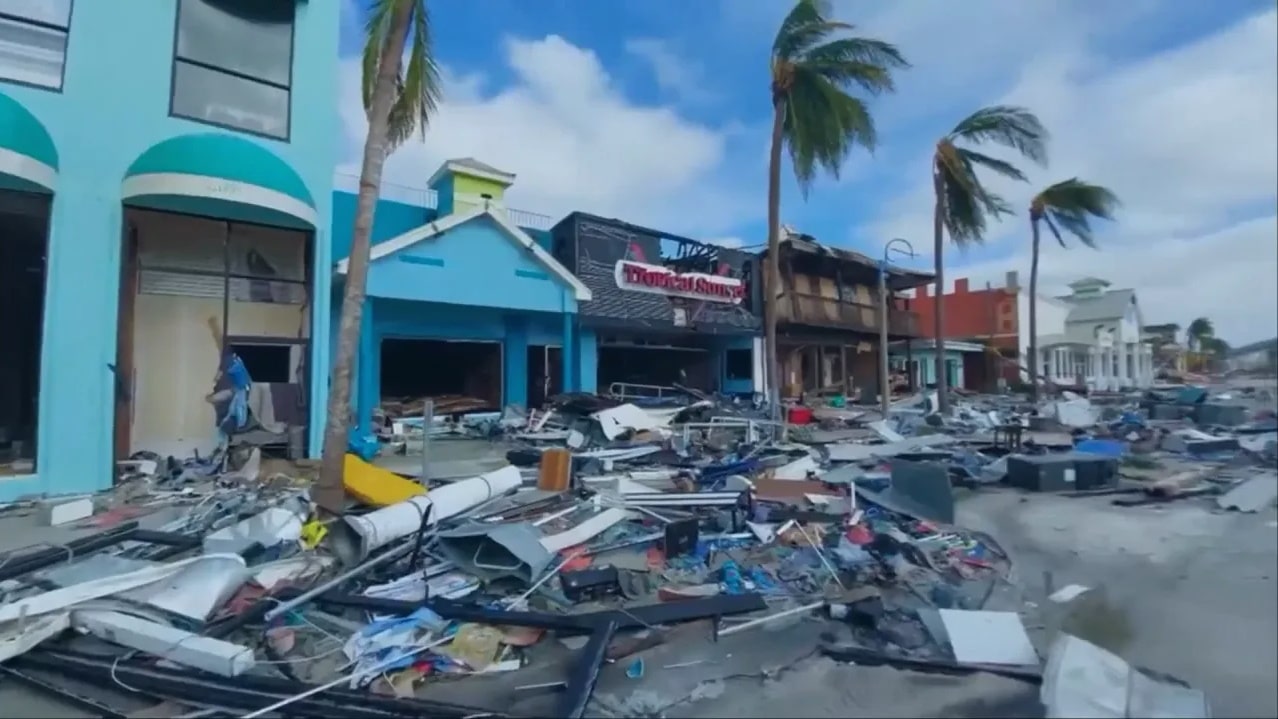 In spite of this destruction, the effort to get back up begins almost immediately. Anyone who is familiar with Florida culture knows that recovery begins as soon as the wind begins to slow down. As Ian thrashed its way across the peninsula, in its wake the sound of generators became apparent before the gusts of wind had subsided in the dark early morning hours. As the sun rose, the whine of chainsaws and the thumping of heavy equipment joined the orchestra of sound as neighbors started to help each other clear a path back to one another. Dead oaks and pines are rapidly becoming neat piles of firewood on the sides of the roads they once blocked. Linemen from all over the country converged on Florida following the storm to help restore downed power lines, bringing power back to 98% of affected areas. The full story of incredible courage and tragedy experienced by those who endured the storm will take years to reveal and tell. 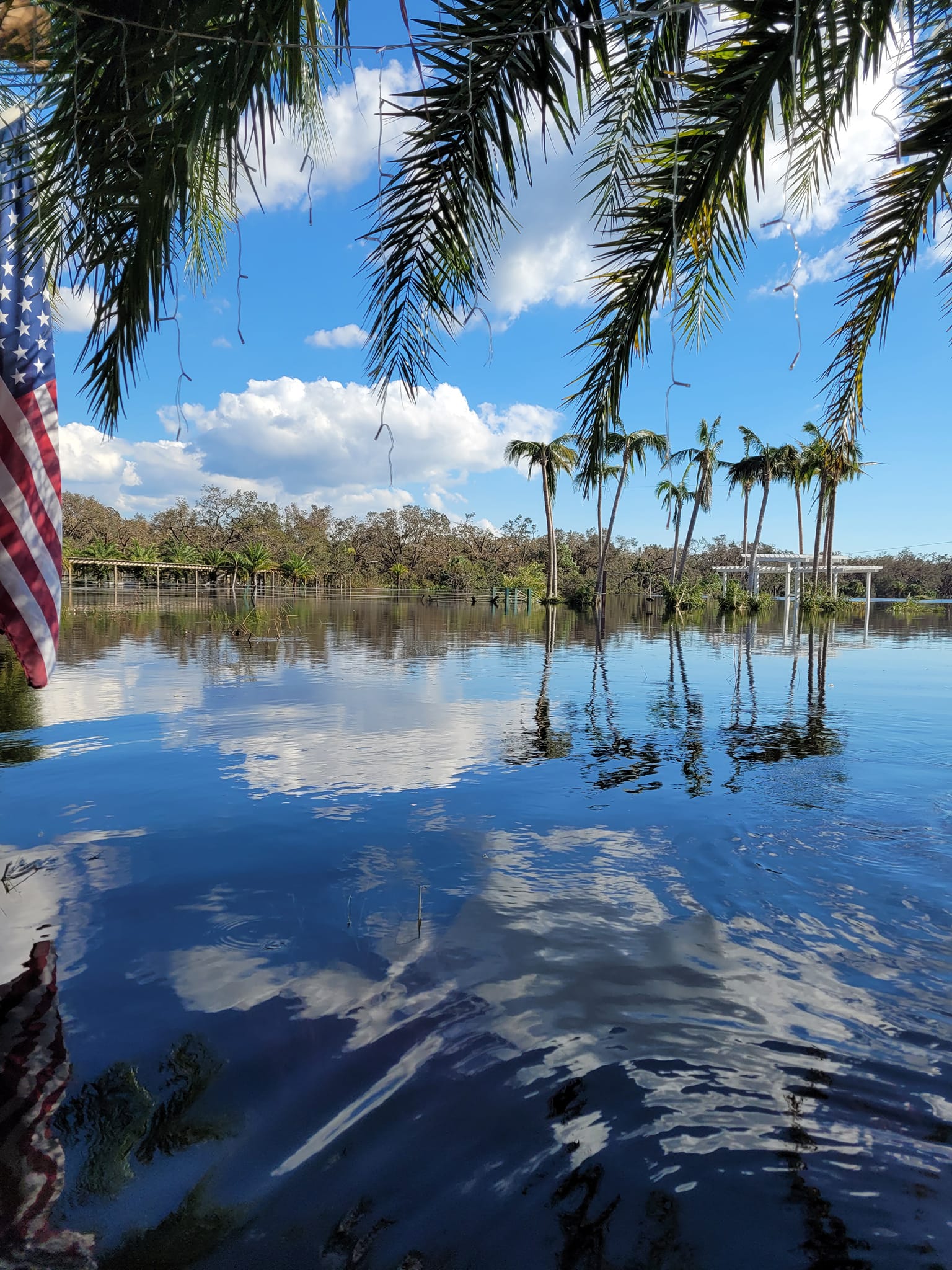 Here in Venice, Florida there was no immunity to Ian’s destruction. At the Hollow in Venice, just a few hundred meters from the Myakka River, the destruction was heartbreaking. The wind damage was extensive. Mighty oaks and tall palms were bent over and tossed about, and the trees stripped of their leaves. Before any recovery could happen, the Myakka River overflowed with the water that Ian dumped on the state and massive flooding occurred. The Hollow is a community cultural center on private land with a 5-acre lake filled with islands and bridges, but it became a 27-acre lake that stretched across multiple properties and left the islands and their bridges invisible under water and stayed that way for more than a week. As the director of the Venice Planetarium at the Hollow, I am thankful for serendipitous timing. Our future astronomical observatory that will house our 14.5 RCOS telescope was able to avoid the flood due to a long build time, preventing its construction in what became flooded ground. The future observatory will certainly move forward, once recovery efforts at the Hollow have been completed.   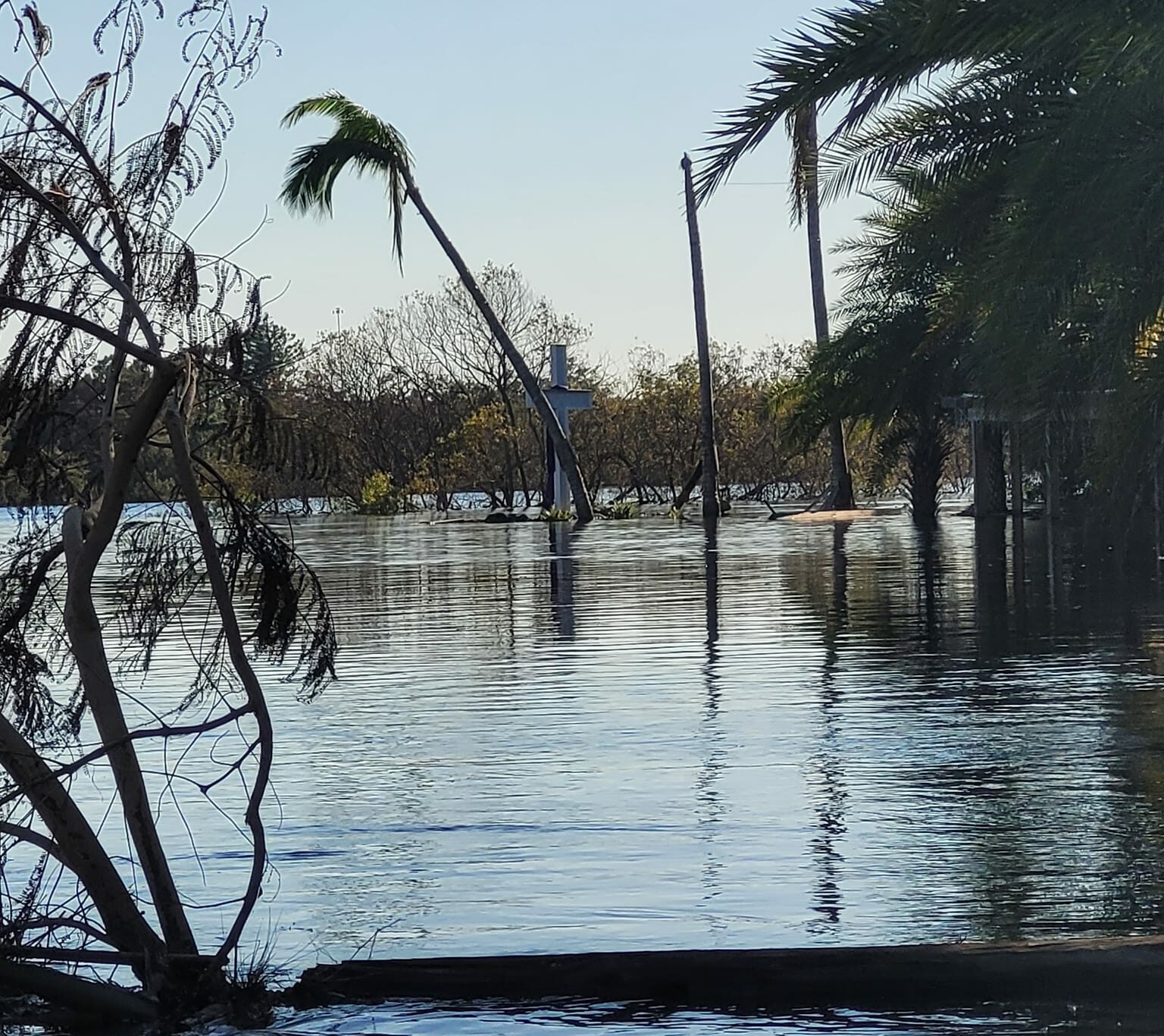 As we begin the effort to rebuild the Hollow, we also continue to help our community recover, distributing the essentials of living to those who cannot get them. This journey to recovery and renewal is a long and difficult one. It was said that the damage done from hurricane Ian would take a generation to rebuild. Perhaps it will take that long, but the challenge of recovery allows for the greatness of our humanity to reveal itself. Only in its destruction can the greatness that is the phoenix be reborn. 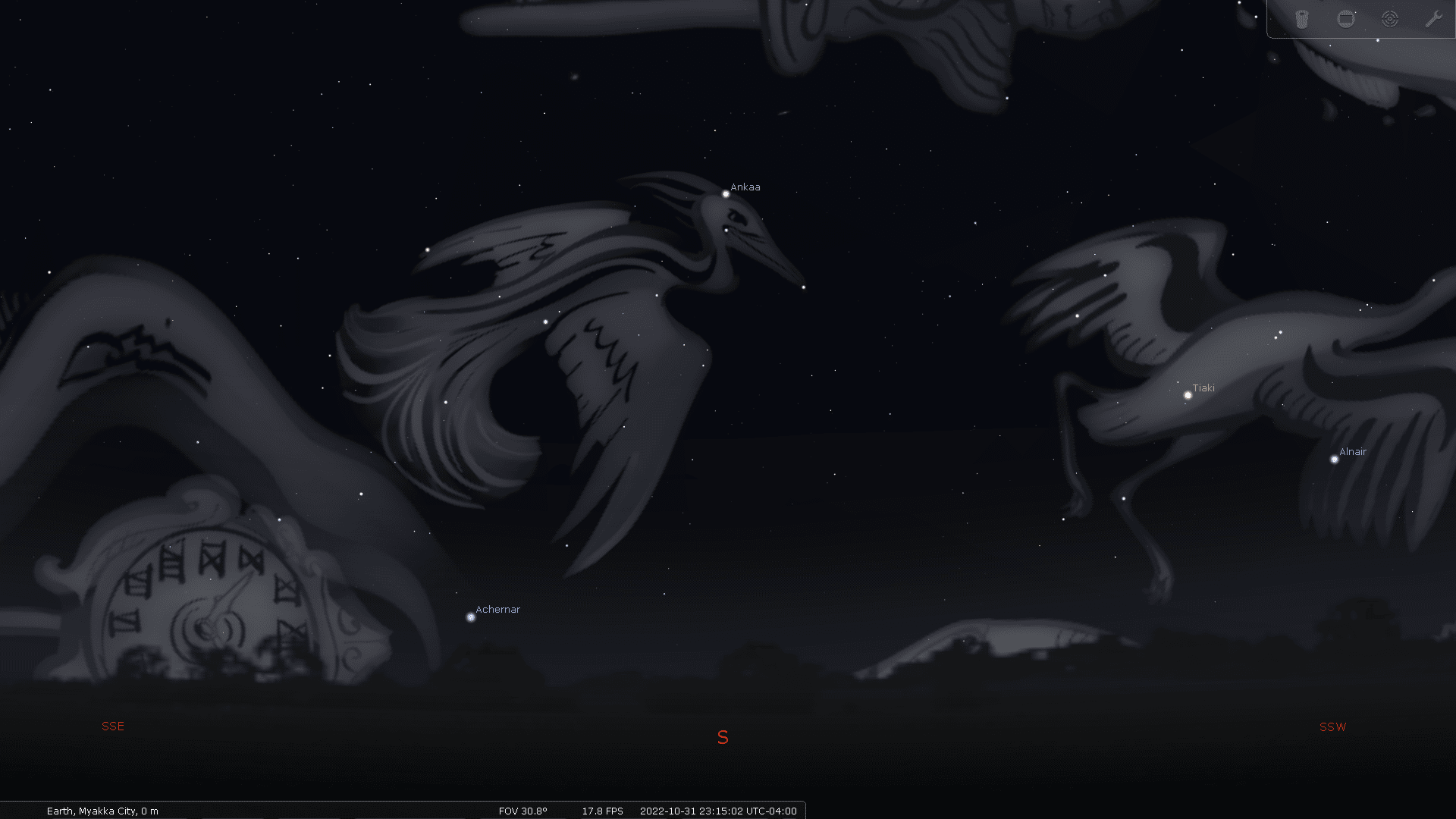 As if to reinforce this, the phoenix is visible in our October sky. If you were to look up in the southern sky on a clear and dark night from anywhere in Florida, rising just 20° above the southern horizon is the constellation of the Phoenix.   Between 11 pm and midnight, the brightest star in the Phoenix, Ankaa (meaning the Phoenix) an orange giant star, is visible to the naked eye as it crosses the meridian. Only because of our deep southerly position in the northern hemisphere can we even see this constellation. This celestial sentinel has been passing over Florida’s skies certainly as long as hurricanes have been blowing across the Atlantic, reminding us of the constant cycle of ends that lead to new beginnings.   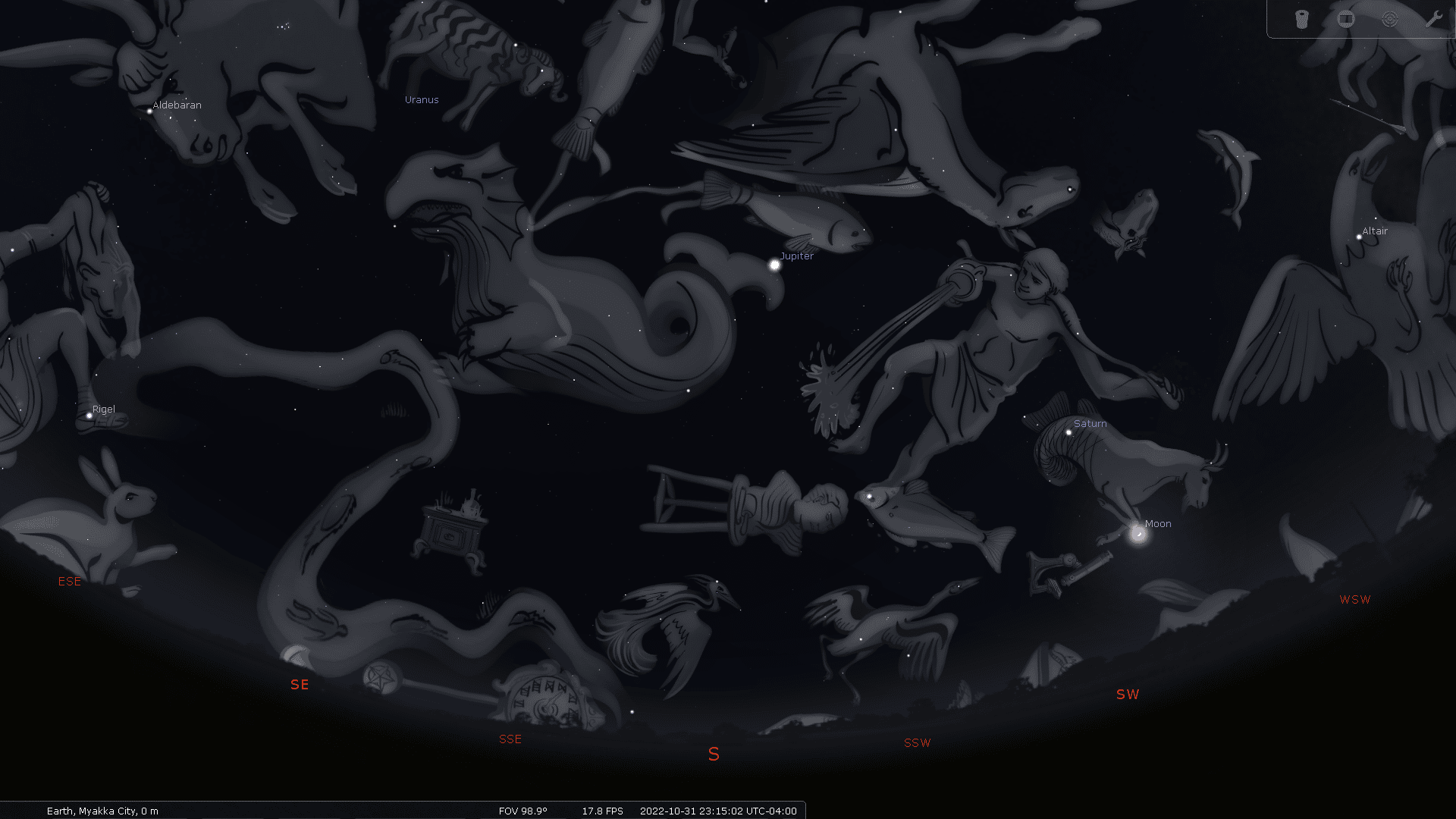 My name is Howard Hochhalter, and I am the director of the Venice Planetarium and future observatory at the Hollow. As we all continue our efforts to recover from Hurricane Ian, I hope to bring more astronomical news concerning our nighttime sky and how to engage with it at your own home, here with us at the Hollow, or anywhere you can see it.   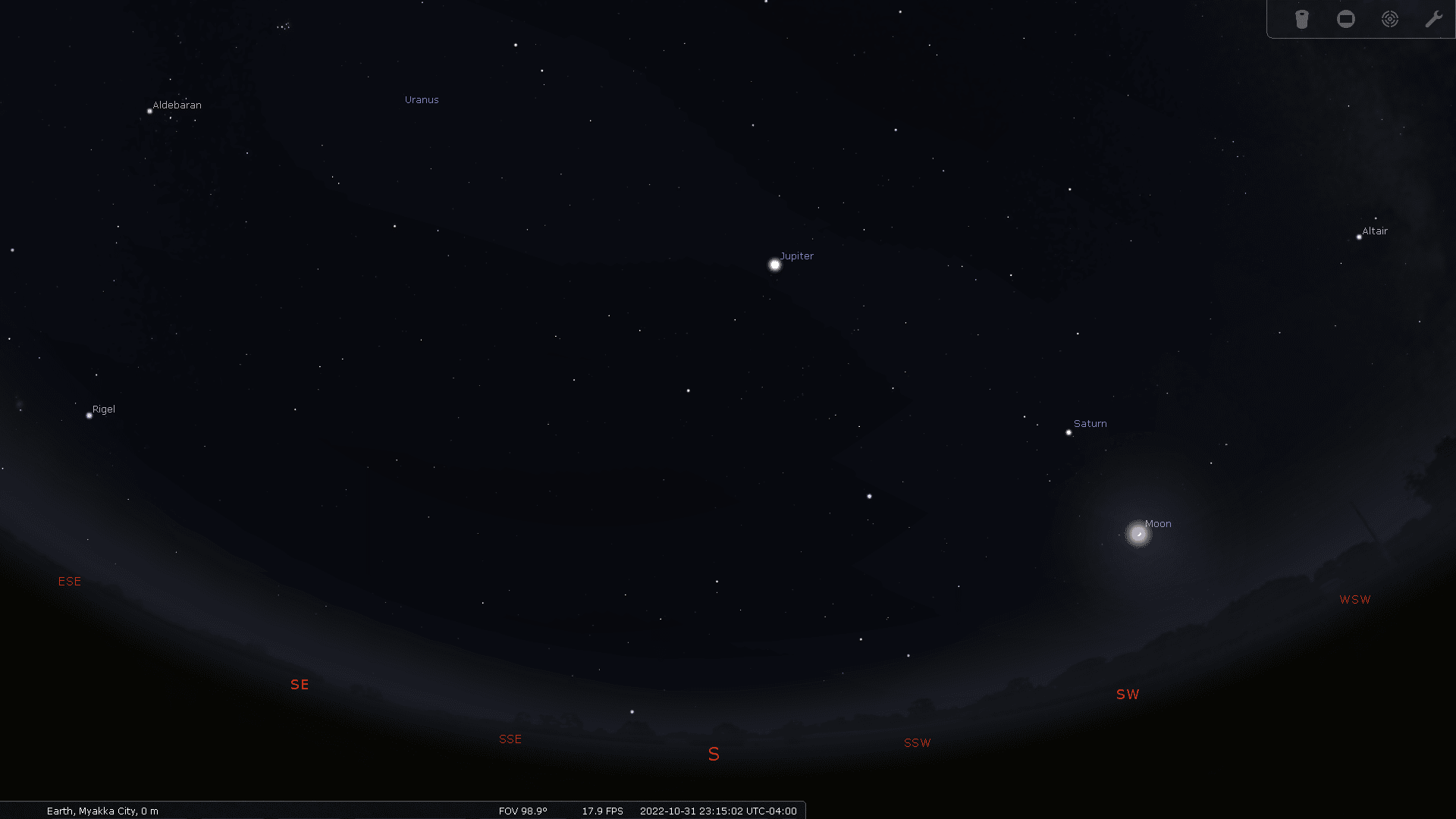